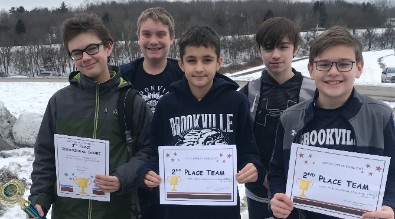 In the High School division, the team of Donavan Hoffman, Chase Evans, Bay Harper, Jonas Parson, and Aaron Park earned a total of 1,280 points and were crowned the champions!

Bot teams will continue their season next month.  The Junior High team travels to the DuBois Scholastic Challenge on Thursday, February 27th.  They will compete at the Penn State DuBois campus beginning at 6:30 PM.  The High School team will compete on February 4th in the annual Riverview Intermediate Unit #6 Academic Bowl and then on March 12th at Penn State DuBois.

Good luck to both teams as they conclude their seasons!