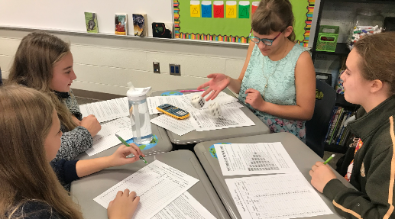 In Mrs. Bish’s room students played a trench warfare game and focused on the important role trenches played in WWI. Mr. MacBeth’s room focused on history’s first dual between ironclad warships in WWII. Students played a game symbolizing the famous battle between the Monitor and Merrimack. In Mrs. Haines room students played a review game about the Cold War and reviewed what happened during those 45 years of tension between the United States and the Soviet Union. Mrs. Watson’s room went back in time as students analyzed song lyrics from music during the Vietnam War with the help from Miss Bickerstaff. Students also created a timeline of important events from the war. Mr. Irwin’s room focused on “The Forgotten War” where the United States came to the aid of South Korea in the Korean War.